As a matter of fact the 26-year-old guitarist, who has recently made quite a name for himself within Toronto’s jazz community, dropped out of York University’s music programme after only one year. And, except for some formal lessons with a guitar teacher a few years ago, has never studied theory.

Instead Lofsky prefers to spend many hours a day practicing his instrument and describes himself as a “self-taught guitarist”.

“I find it’s better if I work things out on my own.” He told me one day last summer when we met in a downtown Toronto bar. Dressed in jeans, sneakers and a sweat-shirt, Lofsky still looked very much like a student. It was no surprise to learn that he still works three hours a week at York during the school year, supervising a workshop for aspiring musicians and explaining how they can improve their playing.

At the same time, he has built up a reputation for his work as a sideman with some of the city’s best-known jazz performers, including flautist Kathryn Moses, alto saxophonist Jerry Toth, pianist ted Moses, and trombonist Butch Watanabe, as well as by playing clubs and in concert with his own trio consisting of bassist Kieran Overs and drummer Joe Bendzsa. Although he has worked his share of weddings and bar mitzvahs in the past, he says “in the last six months my main source of income has come strictly from jazz gigs.”

No wonder, Lofsky’s guitar-playing is so impressive that when Oscar Peterson heard play with the Watanabe band one night a few months ago, he was so impressed that he immediately asked Lofsky if he wanted him to produce the guitarist’s first record. Lofsky did, and at the beginning of summer Peterson produced a trio session at Toronto’s Manta Sound featuring Lofsky interpretations of such classics as “Body and Soul” and “Giant Steps”, as well as Lofsky’s own “Riff-ic Blues”. The yet untitled album should be released on Pablo sometime this year, and will make him that label’s only Canadian performer besides Peterson.

Ironically, Lofsky didn’t initially plan on becoming a jazzman. Like most members of his generation, he was attracted to rock music at first.

Born in Toronto, he got his first guitar when he was 13, emulating his best friend who had just been given one (his friend later gave up playing). After taking some simple instruction, Lofsky began playing with a band at local teen clubs and at 15, after getting a better electric instrument, started playing heavier rock under the influence of guitarists like Eric Clapton, Jimi Hendrix and Johnny Winter.

At 16 he decided he was going to become a full-time musician, and during the year after graduating high school played Rolling Stones and James Gang material with a series of bands, and took his only formal, intensive instruction. Soon, dissatisfied with the direction in which rock seemed to be going, and finding too much of it starting to sound the same, he looked around for a new challenge.

He found it at York when he began hanging around with musicians who were interested in jazz. He had initially rejected the sound a few years earlier, but after hearing Miles Davis’ :Kind of Blue” LP he was hooked. Soon he was buying transcriptions of famous jazz solos and trying to play them.

“I got lost most of the time,” he reports ruefully.

Although he dropped out of university the next year, he still commuted to York to play with other musicians and that experience, coupled with his new regimen of practicing, soon got him some work. After he played a few impressive after-hour gigs at small clubs around the city, the ripple effect began, and very quickly one job led to another, “Word travels fast in jazz circles,: he says.

“You have to be emotionally ready to play jazz,” he affirmed that day, as he sipped his beer, “and you have to be serious about it because it’s your life’s work.” Now that he feels himself motivated enough to be a jazzman, he’s exploring other musical avenues, such as composing.

He sees a large chasm between full-time composers and musicians. Some musicians are writers and others are players, he says, and right now his biggest kick comes from subtly changing an already exoisting composition so that his improvisation adds something to it. “I like to put my personal mark on someone else’s tune, and play a solo that can stand on its own two musical feet,” he says.

The other thing he’s aiming for now is to learn to play with more economy and edit extraneous matter from his solos so that only the best will be left. He wants to be able to produce work like master editors, such as Ed Bickert and Count Basie.

Lofsky seems well on his way to achieving that mastery. After all, he’s already come so far in a short time – and he’s come there on his own. 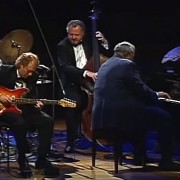 A Letter from Oscar Peterson 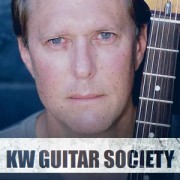