Legendary Canadian guitarist Lorne Lofsky was making his first visit to the UK in over 20 years – the last time was as a member of Oscar Peterson’s quartet. For this LJF appearance he was joined by fellow Canadian, vocalist Lauren Bush, resident in London, for their project: The Chet Stream, a salute to trumpeter and vocalist Chet Baker who would have celebrated his 90th birthday this year. All of the songs performed were staples of Baker’s repertoire and as an extra treat, Lofsky told stories of his many gigs with Chet. He tells a good story in an amiable, laconically humorous and engaging way. 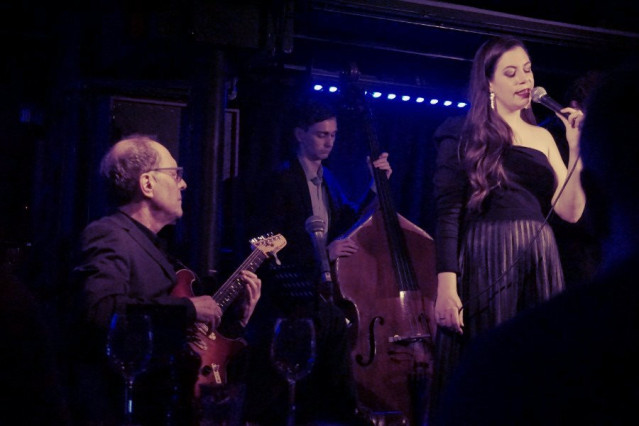 Vocalist Lauren Bush made her mark well with a variety of great standards like It Could Happen To You, What’ll I Do and The Touch Of Your Lips as well as a refreshingly medium latinised treatment of You Don’t Know What Love Is. Of particular note were two (slightly) torch song ballads, Everything Happens To Me and Darn That Dream. Both of which were effectively persuasive in the duet sections between Bush and Lofsky.

Solo guitar in the hands of someone like Lofsky is the most sensitive vehicle to bring out the pathos of a song especially with a vocalist. His rich, warm and clear sound which penetrates and sings in equal measure was magical, to say the least. Not only in his single note phrases but in a chordal context too. He is also not one to resist the opportunity to quote familiar melodies in his improvisations, all of which were welcome and added a light-hearted buoyancy to the proceedings.

No stranger to verbalising over the mic, Bush freely regaled the packed audience with her love of Baker’s music and legacy, plaudits to Lofsky and the quartet as well as cheeky, ad hoc asides which were appreciated by the capacity audience.

The instrumental selections included time honoured Chet classics like Stella By Starlight, I Remember You and Autumn Leaves as well as lesser known Jazz gems like Hank Mobley’s Funk In A Deep Freezeand George Shearing’s Conception. All of which were handily negotiated by trumpeter/flugelhornist Miguel Gorodi, bassist Adam King, and David Ingamells’ drums. Gorodi’s fluent melodicism sparkled throughout with elongated phrases that defied the built in challenges of weaving smoothly through the multi octaves of the trumpet. Bassist King, in addition to offering several melodic and clearly drawn solos was ever the solid accompanist. He and drummer Ingamells’ joint emphasis with varied dynamics along with an ever-present commitment to a swinging undercurrent provided a winning factor in bringing out the best for the songs and soloists.

Lets hope that Mr Lofsky and his guitar will return to the UK in less than 20 years!

A Letter from Oscar Peterson