And Lets His Fingers Do the Walking 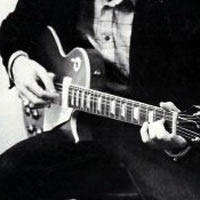 The tune Giant Steps was written around 1959 by the late tenor saxophonist John Coltrane. It is a classic of modern jazz, 16 bars – once repeated – of harmonic treachery that can’t be taken at any tempo slower than impossible; Coltrane ensured that in 1959 with hois own definitive recording.

A musician does not lightly choose to play Giant Steps. Call it on the bandstand and the other players tend to balk a little.

Lorne Lofsky  likes Giant Steps. The young Toronto guitarist called it twice a few Sundays ago at the Cafe May; he’ll probably call it again this coming Monday at the Ontario Science Centre, where his trio gives the latest concert in the Sound of Toronto Jazz series.

At Cafe May his first request for Giant Steps brought the response “maybe next set” from his bass player, Kieran Overs. In its place the trio played Sonny Rollins’ Oleo, still paced at impossible but harmonically a little more manageable. Lofsky, Gibson Les Paul guitar in hands, tore a strip off the tune, as is his wont at such tempos. And well into one of his characteristically convoluted improvisations he dallied for just a moment, long enough to slip in the first four notes of the immediately recognizable theme from Giant Steps before moving on his way somewhere else.

In between tune discussions with his sidemen, while he lights up yet another cigarette, he refers to it as “our perennial favorite”. Later, in calling it for the second time, he remarks “I think we’re ready for our big number”, to which Overs ruefully adds the qualification “you mean you’re ready for your big number”. It has become something of a running joke between the musicians. But this time they agree to play it.

For the first 32 bars Lofsky has the easy part, marking the chord changes as they pass with every second beat. Overs is playing the rquired four-to-the-bar bass line with an inpressive display of mental and physical dexterity, and drummer Joe Bendza is maintaining the momentum behind. No wonder they’re not too keen on this thing.

After 32 bars the guitarist takes over and immediately pushes the music to the limit: he’s out there walking a tightrope, losing his balance now and then and falling occasionally, but dusting himself off with a grimace, a muttered oath or shake of the head, and climbing right back on. Lofsky likes to take chances. “As long as I’ve played,” he admits, “I’ve played that way.” And that daring, among one or two other qualities – like extreme technical proficiency – makes Lofsky one of the  most exciting jazzmen in the country.

He has been taking chances for about nine years now, beginning at 16 as a rock guitarist under the influence of Eric Clapton, Johnny Winter and Jimi Hendrix, and playing in neighborhood bands in and around the north end of Toronto, Even then, he says, he “never played any solo the same way twice.” After high school he was a member of Arctic Fox, one of Toronto’s many now forgotten rock bands, making “$60 a week, $100 at most.” He admits that there have been weeks since when he has done “much worse” as a jazz musician.

“While what was going on,” he explains, “I was trying to figure out how to make the transition to jazz. I’d heard a couple of Miles Davis records I really dug – Kind of Blue in particular.” Kind of Blue is another 1959 recording, and another modern classic among trumpeter Davis’ many modern classics. Coltrane’s on that one too. “I listened to it all the time and I really liked what they were doing. But I had no handled on it; I understood it only as far as I liked it…”

The tune Just Squeeze Me was written in 1946 by Duke Ellington and Lee Gaines. It is a classic among pop songs, ands a favorite with musicians who have an ear for pure, singing melody.

Lofsky has such an ear and he called Just Squeeze Me that same Sunday night, at the Cafe May. There were no objections. The tempo was easy, the attitude appropriately respectful. Lofsky played around with chords this time – he moved them masterfully, clearly delineating all the melodic contours with sequences of smooth, intriguing combinations of notes. The closing pasage of his improvisation was a brilliant exercise in the manipulation of tension, a puzzle created on the spot and its solution provided with just a slight – delicious – hesitation. Lofsky will take chances at any tempo.

He learned Just Squeeze Me from a 1974  record, Pure Desmond, – yet another modern classic – by the late alto saxophonist Paul Desmond with the Toronto guitarist Ed Bickert in his rhythm section. And if two years in the jazz program at York University ahdn’t provided Lofsky with a handle on jazz, Pure Desmond, and more specifically, Bickert’s playing on it, did – “I’ve been pretty good at lifting things,” he explains, not meaning to sound criminal about it, “And that’s what I did – I lifted some of Ed’s solos. He was, and is, my favorite guitarist and I figured he’d be a good foundation. Then I listened to all kinds of people, like John Coltrane and Bill Evans – I really like Bill Evans – and took a little from each of them. There are obvious inferences in my palying as to who my influences are; I’m no different than any other musician.”

Like Bickert, Lofsky is a superior ballad player. And the character revealed in those ballads seem a much more accurate reflection of Lofsky’s off-stage personality than the aggression of the fellow who charges boldly through Oleo and Giant Steps. In conversation he is easy-going and articulate, with an irrepressible sense of humor that works on various levels according to company and context, and naturally finds its way into his music.

He admits he’s not in any great hurry to make a name for himself. He’s letting things happen. To that extant, the similarities to Ed Bickert extend beyond music. “When I play, I like to take chances, but when it comes down to hustling the music, I’m not that aggressive. It’s almost degrading.” Nevertheless, he says, “sometimes I get my publicity chops together and make a few phone calls.”

His career, then, has developed gradually, starting four or five summers ago with the occasional evening at this same Cafe May, to which he has returned for one more night after almost a year’s absence. And what a difference a year has made. as 1979 began he was an important voice in Shelly Berger’s big band at Cafe Soho – a rewarding but hardly high=profile gig. As it ended he was seeing Canada as a member of Kathryn Moses’ popular quartet. In  between there were weeks at one Toronto club or another with the veterans Ted Moses, Jerry Toth and Butch Watanabe, a special appearance as a “new face” at the Art Gallery of Ontario’s summer concert series, and even the odd spot here and there with his own trio. There’s one such coming up in February at the Cookery in London.

Although he thinks “this town needs one more club – one where Ron (Allen), Alex (Dean) and other younger musicians like us can play”, he’s not about to leave town in its absence. There may be more work in New York, but there are also more musicians in competition for it. “Look at it this way,” he says of Toronto, “where else can you go downtown fairly regularly and hear the greatest guitar player in the world?” The reference is of course to Ed Bickert. Lofsky continues: “Sonny (Greenwich) has been around a bit more lately, and there was Lenny (Breau), when he was doing things – it’s a great place for a guitar player to be.” He seems unaware that he is approaching that company himself; indeed the observation probably would make him quite uncomfotable.

Nor does he seem very aware of a certain personal magnetism he holds over some members of his audience. As someone at the band table commented between sets – Lofsky wasn’t around at the time – “all the girls think he looks like Peter Frampton.” He doesn’t, really, but the same kind of appeal apparently is there. Nevertheless he gives every indication that it’s the music that’s most important. Just Squeeze Me after all, is just a good tune. Nothing more.